I wish, wish, wish I had taken a before picture of the kitchen of our 1970s Tri level, all the way gutted with bare walls somewhat ripped up from demolition, and no ceiling, just attic and trusses up there with dust, and insulation constantly raining down from the attic. After they ripped the sink out it was so gross in there it scared me to walk through it alone. It was like a burned out building or a scary bomb shelter! They discovered some water damage in the wall behind the sink so it was black and soggy and scary, and I kept thinking about living things from the attic or from under the sink crawling out to get me. The bowels of your kitchen are really ugly and yuck. I never, ever will remodel a kitchen again. It is a KITCHEN NIGHTMARE!! (as Chef Ramsey would say…) 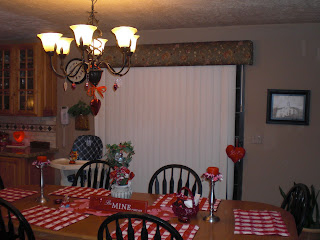 My husband would be working with the plumber and the drywall contractor and he’d see me coming in the area and he’d just say, “You better get outa here….you better not look at this!” I get all heebie jeebies when there is anything gross, spiders, slime…I can’t handle much of that.

At one point in the kitchen demolition we had knocked out the lowered ceilings, and really wanted to bump it up to the interior rafters. It turned out we couldn’t knock out the trusses in the rafters because our house might just fall down. So we had to compromise and have just a raised ceiling. And that ugly light box everybody used to have with flourescent long, tube lights inside? So ugly! Who invented those anyway? That must have been the cool look in the 70s cuz everybody had them! So glad to see that thing take a hike. You can kinda see where it used to be. I haven’t painted over the plastering Robert (our drywall guy) did over the ceiling yet. I can’t paint again till Spring….or maybe summer…. (I’m lying again…I’ll be painting this weekend in my craft room…)

I remember the day we tried to redo the drywall ceiling up there. My husband built some 2 x 4s into a giant T shape and said I’d have to ” help him put up the sheets of ceiling drywall.” SAY WHAT? Little did I know what I was in for.

We’d both carry in a sheet of drywall  from the pile in the truck he’d just purchased from Home Depot. That was bad enough. Those things are HEAVY bad boys! Then he’d hoist it up with his manly brute strength (I actually kinda liked watching that part, butt cracks and all) and then he’d tell me to grab the giant 8 foot tall T and to push up the drywall sheet for him to drill the screws. HUH? Are you Kiddin ME? Now, when I look back on that, I am very proud of myself. I pushed that giant,  hulking, sucker up there and he drilled the screws in with his favorite cordless power tool. You know men and their power tools. Pretty studly.

We got sick of doing THAT after about 2 sheets and called in the cavalry. I think poor Robert, our contractor had to fix a lot of “do it yourself-er” stuff we thought 2 college grads should be able to do ourselves. We aren’t as smart as we think we are, as it turns out. I told Robert not to tell me what stuff he actually had to redo. I still want to think I helped with the HE-MAN work, if you know what I mean.

﻿
My favorite thing we did  together was our bead board island and the 2 wooden legs decorating the 2 end corners. John did the beadboard around the 2 sets of drawer units. We asked the company we bought direct from, (AWA Cabinets in Salt Lake Link HERE) to just not add decorative backing on these two. Then I went looking for a way to do “custom legs” on the 2 back corners without paying somebody to do it custom. I found some clearance table legs at Lowes way in the back on the wall. They were packaged as half legs. I bought 3 of them, had John cut 1 apart down the middle with the table saw, and glued one side on to each half leg, so it was a 3/4ths leg and then puttied in the seam with wood putty. John didn’t catch my vision at first but he just went with it…and figured out the math of fitting in these 3/4ths of a leg onto the 2 corners of the island. It was really fun as it came together! I think we rocked it. What do you think?

It was looking like it would work to just hook the legs onto each 90 degree angle of the island back corners, but both legs were too short to reach the granite top. So we went back to Lowes and looked for some kind of decortive block to add to the top. John then cut a 1/4 slot out of each of the block sides (tricky to do) and glued them to the tops of the legs.  He added on the legs to the 2 corners, gluing them to the beadboard edges with Liquid Nails. That’s the stuff that comes in a long tube with a glue bottle point on one end and you shoot it from a gun. That stuff is miracle goop!  Then I picked out Glidden (my favorite paint) in eggshell finish and painted everything a light sage green. You can kinda see the seam from the glue together in this close up pic, but nobody else notices things like that. The legs ended up costing us less than $20 bucks! How’s that for custom?

I was adamant that I wanted a wooden hood over my new stainless stove. I’d looked at so many online.   I knew pretty much what I wanted from looking through many, many kitchen magazines, but I didn’t want to spend thousands of dollars on one. I loved the pounded copper hoods but they were so pricey I didn’t love them THAT much. Custom hoods were out of our budget. So I looked around in the back rooms of cabinet manufacturing places. They always have things that have been returned. I think the place was called Excel Cabinets in downtown Salt Lake City, West of the freeway.

﻿
We found one that we thought might work and bartered with the guy to pay $40.00 bucks for it. We took it home, sawed it in half to cut a piece out of the middle, and glued it back together at just the right width to fit in between the new cabinetry. We then covered the whole piece in beadboard. I remember the edges being hard for John to get just right, but we used some wood putty to fill in anything that wasn’t really flush. Lastly I found a swirly decoration for the front from Home Depot for a few bucks. It kind of goes over the seam from sawing the thing in half.

﻿
Then I painted it sage green to match the beadboard island. Both of them turned out really pretty. We put up the tin tiles above the backsplash that go all the way up the wall under the hood. Pretty!  I still have to get some lights under that vent. It’s not bright enough when I’m cooking in the kitchen. Lights are still a to-do item.  3 cheers for do it yourselfers!!! The last 3 projects coming up…